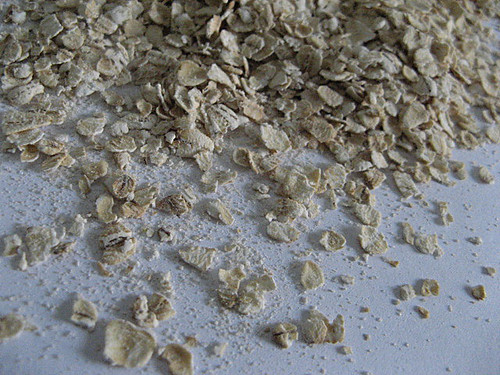 So, the Internet has been abuzz with the Momofuku Crack Pie, a $44 pie that apparently has Anderson Cooper’s heart, and is really nothing more than a caramel cream pie.

A really good caramel cream pie. And a big reason for its addictiveness is its sugary oatmeal crust. Which I share with you today.

Yes, there’s some crack pie a-coming here in our home. But first- the oatmeal crust.

What you’re basically making is a giant, rectangular oatmeal cookie, which you’ll then process with even more butter and sugar to create a heavenly, nutty crust.

Preheat the oven to 375 degrees. In a medium bowl, sift together the flour, baking powder, baking soda and salt.

In the bowl of a stand mixer using the paddle attachment, or in a large bowl using an electric mixer, beat the butter, brown sugar and sugar until light and fluffy. Whisk the egg into the butter mixture until fully incorporated. Slowly beat in the flour mixture, a little at a time, until fully combined. Stir in the oats until incorporated.

Spread the mixture onto a 9-inch-by-13-inch baking sheet and bake until golden brown and set, about 20 minutes. Remove from heat and cool to the touch on a rack.