If you have leftover croissants or you want to jazz them up, here is a simple, easy and really tasty treat that will satisfy your custardÂ cravings. Most recipes recommend using bottled blueberry preserves but I prefer using fresh blueberries mixed with sugar for a little sweet and tart bite toÂ contrast withÂ the luscious pudding.Â  Whatever you choose to use, you will still end up with a yummy dish that’s good for brunch, dessert or a midnight snack! You can also add almonds or walnuts on top for that extra crunch.

Preheat oven to 350F.Â Coat a 9″ square baking dish (or a rectangular one) with non-stick cooking spray. Cut croissants in half and then into strips. Lay the bottom strips into the dish and sprinkle half of the blueberry mixture evenly on top. Place the remaining croissant strips on top of the first layer and the remaining blueberries.

In a bowl, whisk the eggs, condensed milk, butter, water, cinnamon and vanilla until everything is all mixed. Pour the mixture on top and around the dish, pressing down with a spoon so that everything is submerged in the egg mixture. Let stand for at least 30 minutes so that the mixture seeps into the blueberries and croissant strips. Bake for about 20 – 25 minutes or until the top is golden brown.

Top with powdered sugar before serving.

Nothing says home grown cooking than bread pudding! I must say no matter where you are and how long the years have passed, we all are just softies for home baked bread pudding. I could never say no! Sometimes, I make it a point to have left over bread just so I have a good excuse to make some … even just for a nice sweet afternoon spent absolutely doing nothing!

You all know the basics of bread pudding, right? Itâ€™s just day old bread, milk, eggs and sugar mixed together and poured into a pan and baked. Anything else you want to add to it is all up to your creativity and whatâ€™s in your pantry. You can add raisins, nuts and other fruit of your choice.

Although it is typically a dessert, why limit yourself to that? Have it for breakfast! You may choose to serve bread pudding with rum sauce, whiskey sauce and caramel. It is just as heavenly with custard sauce or vanilla cream, and even chocolate. Â Add a scoop of vanilla ice cream or slather on some luscious whipped topping and you’ve got yourself a pretty fancy dessert without the real fuss.

Essentially, it’s going to back to basics … back to where it all matters …it’s what hits home and it always feels just as good as you always remember it.Â So just play around with this home grown recipe and use your favourite things to eat. You might just come up with a seriously genius creation. Hereâ€™s something for you to whip up this coming weekend maybe?

Instead of layers of Chocolate, the bright layers of berries in this dish are very light (light enough for a summer treat) and fruity to go with many dishes as a dessert.

Try experimenting with different soft fruit in place of the Peaches and Raspberries â€“ you can use a whole range instead, just to keep the meal fresh and interesting.

1. Split the Sponges, and fill with the Jam. Cut each into three wedges, and place into a large dish. Mix the Sherry (or Marsala) with four tablespoons of the Peach Juice, then spoon over the Sponge and leave to soak for fifteen minutes.
2. Put the Peaches and most of the Raspberries into a serving dish, then place the Sponges on top.
3. Mix the Mascarpone in with the Custard until creamy and smooth, then spoon over the top of the Sponge and level the top.
4. Whip the Cream, then spread on top. Decorate with the Chocolate Shavings and remaining Raspberries, before chilling until ready to serve.

A classic pudding, with a luxuriously decadent twist â€“ the addition of the Whisky sauce makes this a very rich treat.

Make sure you pick a Scottish Whisky, as opposed to an Irish Whiskey â€“ the difference is in the flavours and tastes that are wide and noticeable â€“ especially when adding the other ingredients.

1. Heat an oven to 180c, and line a large tray with baking paper.
2. Soak the Dates in the Boiling Water. Cream the Butter and Soft Dark Brown Sugar in a large bowl until smooth. Then add the Large Eggs, one at a time, whisking until smooth each time.
3. Start to slowly add the Sifted Flour to the mixture, along with the Bicarbonate of Soda. Mix in, and then drain the Dates over a bowl to catch the liquid, and lightly blend them in a food processor. Add the processed Dates back to the Water, then add the mixture into the batter.
4. Pour into the baking tray, and bake for thirty to thirty five minutes, or until a skewer can be pressed through and come out clean. Leave to cool.
5. For the Whisky Sauce, add the Cold Water to a pan along with the Caster Sugar, and bring to the boil for about five minutes, until itâ€™s caramelised evenly, then remove from the heat, and add the Double Cream and Whisky.

Itâ€™s Christmas! So what better way to get in the mood than by making a traditional Christmas pudding, itâ€™s best to start making one now, as needs to be refrigerated for anything from two to eight weeks. This recipe has no nuts in as well, but please check on the packaging for anything that you buy (especially for the dried fruit), to make sure regarding allergies.

1.Â Â Â Â Â Â  In a large glass bowl, put the Currants, Raisins and Sultanas, and pour the Sherry over the top. Leave to set for at least two hours â€“ more if you can help it.
2.Â Â Â Â Â Â  Mix the Butter and Sugar in a bowl, beat the Eggs into the mix and fold in the Flour.
3.Â Â Â Â Â Â  Stir in the Fruit and Sherry mix, as well as the Breadcrumbs, Almonds, Orange Juice, Rinds and Mixed Spice.
4.Â Â Â Â Â Â  Grease a basin and press it in, leaving a gap around an inch at the top. Cut a circle of greaseproof paper about one and a half inches wider than the top of the basin. Secure with string, and cover with two layers of foil.Â  Place the basin into a pan of boiling water, which reaches two thirds of the way up the basin, and simmer for six hours, topping up with water when needed.
5.Â Â Â Â Â Â  Remove from the pan, and leave to cool. Change the greaseproof paper and foil, and leave in the fridge for two to eight weeks. Before serving, steam for two hours (as before â€“ in a pan of boiling water).

To serve, you can light it, making sure you blow it out before serving.

Fruit and Gluten Free, these chocolate puddings are a great alternative to the more traditional mince pies as a treat.

They look just like Traditional Christmas puddings, and can be decorated in a variety of ways – such as using left over Icing Sugar to create Holly and Berries, or Iced fruits.

3.Â Â Â Â Â Â  Put the bowl over a pan of hot water, making sure that the water doesnâ€™t touch the base of the bowl or the Chocolate and butter mix will burn. Stirring occasionally, wait until the chocolate has melted, and then remove from the heat, leaving to cool for five minutes.

5.Â Â Â Â Â Â  Whisk the Egg whites until they form stiff peaks, whilst adding the Caster Sugar, one teaspoon at a time. Fold a third of the Egg whites into the Chocolate mix, to soften it.

6.Â Â Â Â Â Â  Fold the rest of the Egg whites into the Chocolate mix, before dividing equally into the six baking tins.

7.Â Â Â Â Â Â  Bake for twenty minutes, before removing from the heat to cool on a wire rack. Mix the Icing sugar with the water, and drizzle most over the top (to look like snow), and mix some red into a small amount of the left-over sugar, and green into another amount. Cut into Holly and Berry shapes, and decorate with these

This dish takes four hours for it to set, so make sure you prepare it well in advance â€“ but it is well worth the wait.

The soft sponge fingers with the soft creamy yoghurt and fresh fruit inside make such a beautiful change to some other desserts, especially since itâ€™s so light!

2.Â Â Â Â Â Â  Slice 250g of the Strawberries, and add these as well as 175g of the Raspberries to the water, and mash lightly.

3.Â Â Â Â Â Â  Take off the heat, and cool for fifteen minutes. Strain into a shallow dish, keeping the fruit to one side.

4.Â Â Â Â Â Â  Dip the Sponge Fingers into the Sugar water one at a time, and line the base of a one litre pudding basin, cutting them to fit.

5.Â Â Â Â Â Â  In a different pan, soak the Gelatine sheets in four tablespoons of cold water until they are soft (it should take around five minutes). Heat the pan up gently until melted.

6.Â Â Â Â Â Â  Place the Yogurt in a bowl with the Vanilla Extract and the remaining 25g of Sugar. Beat in the melted Gelatine. Place half into the Sponge-lined basin, add the fruit then cover with the rest of the Yogurt mix and any of the remaining Sponges.

7.Â Â Â Â Â Â  Drizzle any remaining Syrup around the edge of the basin, and then place in the fridge to chill for at least four hours until set.

8.Â Â Â Â Â Â  To serve, place a plate across the top of the basin, and turn upside down, then top with the extra berries.

A Classic British dessert. Serve fresh out of the oven, with a large portion of Vanilla Ice cream, or swimming in a pool of Custard. The crisp, crunchy crumble on top is a delight when cooked just right â€“ a heavenly treat for anyone.

The tartness of the Rhubarb, coupled with the sweet Ice cream, coupled with the range of textures, this dessert will become a firm favourite once youâ€™ve tried it, and you can slightly adjust the quantities â€“ for a sharper taste, add less sugar, and for a sweeter one, simply increase the amount of sugar included.

5.Â Â Â Â Â Â  Lay the Rhubarb in either a large ovenproof dish, or, alternatively into 4 smaller individual dishes. Pour one tablespoonful over each dish, or all into the one large dish.

6.Â Â Â Â Â Â  Top with the crumble mixture, and put in the oven for around thirty or forty minutes, until golden brown on top and bubbling slightly around the edges

The first pudding I ever learnt to cook, and still my favourite by a long shot! 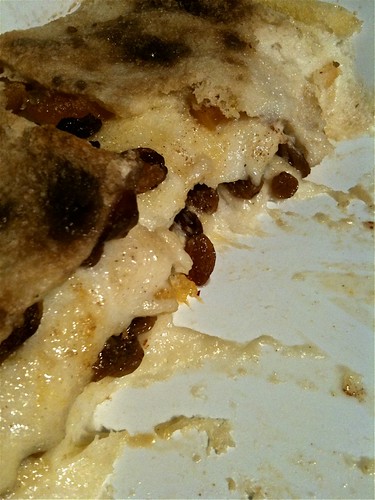 2.Â Â Â Â Â Â  Use some of the butter to grease a baking tray and the slices of bread. Cut the bread into slices and arrange with an overlap

3.Â Â Â Â Â Â  Mix the eggs, milk, cream and sugar well, adding in the fruit at the end, and pour over the bread. Allow to stand for 15 minutes. Grate the nutmeg over the top, and sprinkle the Demerara Sugar to taste.

4.Â Â Â Â Â Â  Cover most of the fruit with the bread to make sure it doesnâ€™t burn. Bake at the top of the oven for 30 to 40 minutes, until just set and golden brown